Our Yachtsale Agent and kite surfer tells you how she does the BVIs! 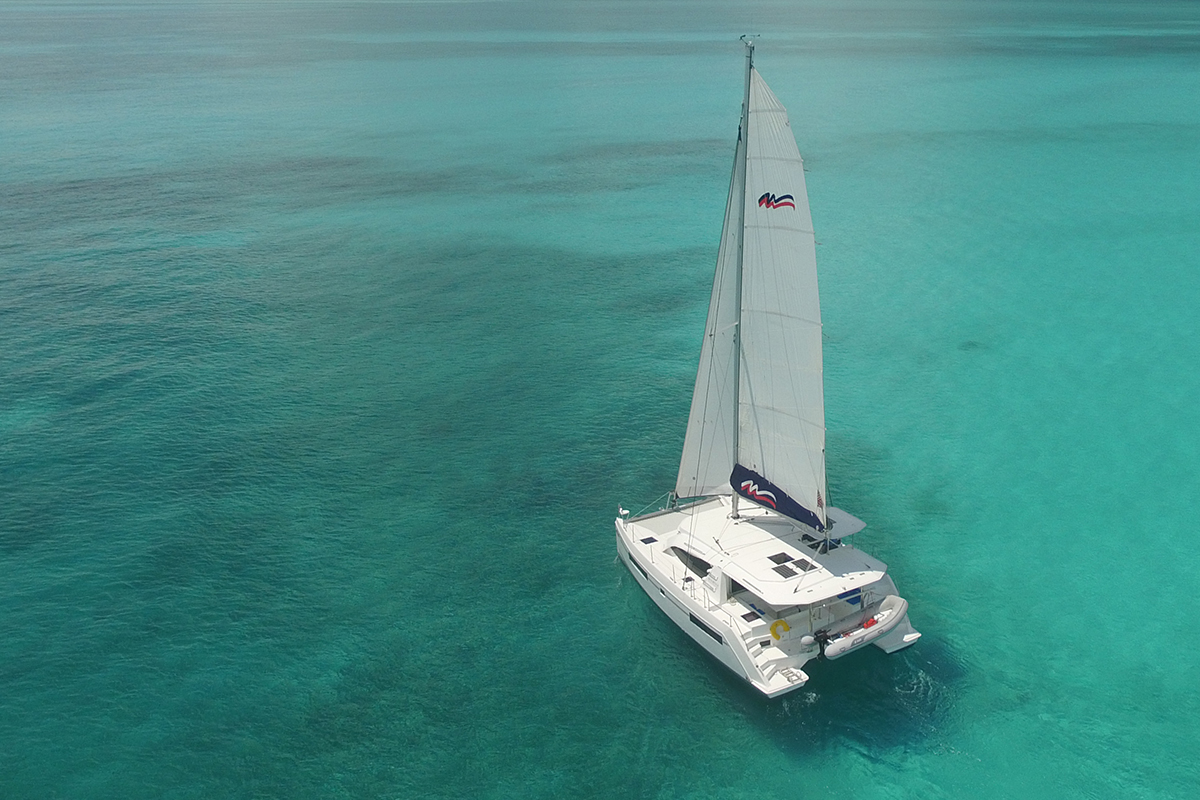 Last month I was lucky enough to return to the BVI’s having not sailed there for over 15 years! Accompanying me was my first mate and husband Niall; a very keen novice fisherman who always manages to pull in enough fish to keep our bellies full, and our good friends Sophie and James who are fairly new to sailing but picked it up super quickly and are now keen to get qualified as soon as possible so they can begin chartering! All four of us are kitesurfing crazy so we made the trip out to the BVI’s with a monstrous amount of kiting equipment including a hydrofoil board which we planned on mastering over the course of the holiday! If you’re not sure what this is it’s a board that has a mast under the water with foil attached to it creating lift making your board hover about a foot above the water’s surface, well that’s the idea anyway! The small plane from Antigua to Tortola was only a 14 seater and somehow our 5 long board bags were squeezed into the hold! We were blessed with a fantastic forecast for June with 20 knots of constant wind showing for each day so we sat on the plane with grins on our faces as we knew we were set for fun times ahead!

When we arrived to the base to collect our Moorings 4000 catamaran we were all impressed with the huge scale of the operation out there but were also pleasantly surprised at how it still managed to feel very personal and friendly due to the attentive staff who were extremely quick to react to any request that we had. The boat briefing was carried out very early next morning followed immediately by the chart briefing giving us plenty of time to walk to the shops for provisions. We still had plenty of time to head out this same day and make it up passed Virgin Gorda where we were lucky enough to have an invite to pick up a mooring off the private island of Eustatia. This Island was to be our kitesurfing playground the following day when we would roll out of bed, load the dinghy with all our gear and rush to get out on the water!

After our bodies were exhausted from a sufficient amount of kiting we took a short trip to Necker Island as once again we were lucky enough to receive an invitation to this private island of Richard Branson’s and get a full golf cart tour of the fabulous island where we got up close and personal with the huge range of wildlife such as lemurs and flamingos! The tour was polished off with a glass of Necker champagne from the top of the great house where we looked down and could see our fabulous Moorings 4000 anchored in breath-taking turquoise waters.Next stop was Anegada! I had lots of special memories of this place when I was last out there with Cruising World Magazine and I was excited to go back and soak up the vibes once again! We had a lovely beam reach all the way up and once we arrived at Anegada it did not disappoint. We decided to spoil ourselves with a lovely lobster dinner on the beach in front of a cracking sunset washed down with a variety of cocktails! Sleepy from an action filled day we headed off to bed for an early night ready for some epic kiting the following day! 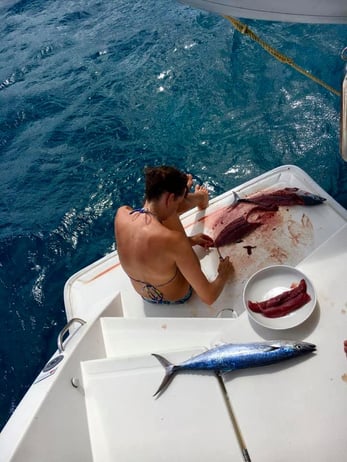 On the north shore of Anegada you’ll find the Anegada Beach Club, it’s a short taxi ride from the main anchorage in a comedy open bus type vehicle and even if you don’t kite this is a nice place to spend some time by the pool and the food in the restaurant was lovely too. Here you’ll find the Tommy Gaunt kite school, so if you’re reading this thinking you’d like to learn to kitesurf one day then Tommy is your man! This spot is perfect for all levels, offering flat shallow water which is sheltered by a long reef… and the reef is the reason why you cannot bring your yacht to the north side to anchor! We kited hard for two days here until our bodies near gave up and I’m fairly certain my arms were an inch longer than when I’d left the UK! So the time had come to leave our lovely Anegada and sail an incredible down-winder to Sandy Spit. Along the way Niall and his wingman James caught us a huge Spanish mackerel and two bonita tuna. Sadly one of the tuna was caught whilst sailing down through the middle of the passage between Anegada and Virgin Gorda and by the time Niall had quickly reeled it in and got it aboard half of it had been eaten by a shark! We were all thankful we’d decided to stay aboard the boat for the crossing rather than taking turns to kite which had been an idea we’d decided against!

We had an evening kite from Sandy Spit with some extremely hilarious moments trying to ride the foil which just threw us off in all directions. We overnighted in White Bay on Jost Van Dyke and made it to the Soggy Dollar Bar just in time for last orders which was lucky as our Painkiller addiction was strong by now and there may have been some tears if we hadn’t enjoyed one before returning to the boat to BBQ our freshly caught fish! We were back on Sandy Spit for 6.30 am the next day to beat the crowds for our kite session and we also had a date for a little drone shoot of our fantastic branded kites! Kiting doesn’t get much better than launching from a small sandy island in paradise and then flying across the super flat water at high speeds with your catamaran anchored up nearby in easy reach for a quick beer stop whenever you need it!

After a dreamy day at Sandy Spit we headed off to Pusser’s at Cane Garden Bay for a lovely rack of pork ribs which nearly broke us as one portion could have easily fed two. Then once again we slopped off to crash out after a quick few games of Uno that is. From here on I pulled the crew away from the kiting spots so I could show them some of the famous sights such as The Baths at Virgin Gorda and the fun and games to be had on Willy T’s. I saved Willy T’s until the final night thinking this was a good idea to go out with a bang, but I learnt this isn’t a good idea unless you’re particularly good at being able to function and get yourself back to your doorstep with a very sore head (unlike me). It was all good fun never the less.

There’s a reason why the BVI’s is the Mecca for charter holidays and that’s because is ticks all of your holiday requirement boxes! Even for us with kiting and fishing requirements the BVI’s is a perfect sailing ground with a variety of options and islands all within close reach. Our 10 day charter absolutely flew by and I feel like we only saw 15% of what was on offer! It was so lovely to go back to a place where I have so many fond memories and to share this special location with my husband and good friends who also said they had one of their best holidays to date!

The BVI’s we love you and we WILL be back soon!

Nancy Poyner has been sailing with Sunsail since she was a child and working with the company since she was a teenager. Her experience in the Yachting industry is extensive having developed professional experience as a Yacht Skipper, in Charter and formally at the dinghy clubs. Nancy is also well travelled and a keen windsurfer, kite surfer and paddle boarder. She’s fast on the water, so just try and keep up!
nancy.poyner@thlmarine.com